Previously we discussed the popcorn ceiling and the lineage that it shares with some of the most famous ceilings in history. Not that your popcorn ceiling is as ornate as the Sistine Chapel, but if your home ever had a smoke living it it, the color will be similar, as tobacco smoke turns the texture a toasted brown color. The color of tarnished gold greeting you when you come through the door is something that we are sure you will not miss. Before you decide to rip down that popcorn ceiling, it is important to have an environmental assessment done by NOW Environmental Services. The possibility of your popcorn ceiling containing asbestos in this day and age is pretty rare but there are thousands of homes still out there that have yet to have it removed.

Why Is There Still Asbestos in My Home?

You might wonder why the asbestos acoustical ceilings and floor tile still exist if the danger has been known for many years. It is because of the nature of asbestos. Asbestos is a mineral that occurs naturally and is actually still mined today in parts of the world. The danger is known, but for all of its negative connotations there still are uses for asbestos today. Many countries do not have the same restrictions on asbestos as the U.S. but its use has slowly diminished due to the known health risks. Asbestos is made up of fibers of varying size. These fibers are characterized by their needle-like points and ability to be breathed in. This is where the toxicity to humans comes from. Once the asbestos fibers are disturbed they break into microfibers and can become scattered into the air, and can then be inhaled into the lungs. Once a sufficient amount of asbestos is inhaled, the microfibers then lodge themselves into the lungs and in large enough numbers, cause all sorts of health problems. The airborne nature of asbestos is why it is so dangerous but it is also why asbestos still exists in many buildings, it is completely harmless unless disturbed.

What Can Be Done 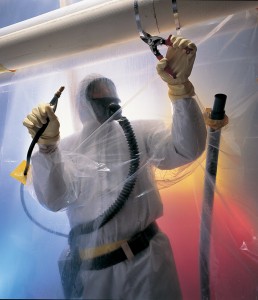 Now the fact that you may have asbestos laying around in your home can be somewhat nerve-racking. Removal of a popcorn ceiling is not a huge deal, but disposal of the asbestos contaminated material can be quite a hassle. Keep in mind that removing a popcorn ceiling that contains asbestos is not out of the realm of possibility of a homeowner but it still carries the risk of exposure. That being said, removing any asbestos materials, regardless of their origin is best performed by the professionals. There are a few ways that popcorn ceiling can be hidden or reinforced but none are a foolproof way of getting rid of the asbestos.

A common way of dealing with an asbestos ceiling is known a encapsulating. This is a way of reducing the risk of disturbance by painting the ceiling with special materials and essentially sealing off the asbestos. Does it work? Well to a point—any time a popcorn ceiling is struck, pieces fall off and could release asbestos into the air.

Many of those with asbestos ceilings simply elect to cover the old surface with drywall. This seals in the asbestos and the risk of release is physically blocked by a false ceiling.

Assuming that you have determined your ceiling is free from asbestos, popcorn ceiling removal is pretty easy, but extremely messy. You will need enough plastic to cover every surface that will need to be kept safe from the material. Make sure you cover everything and be sure to turn off your A/C or heater so the material is not blown around. Take a weed sprayer and fill it with warm water. Spray a small area and let it sit for at least 20 minutes. Now for the fun part, utilizing a paint scraper, slowly scrape off the popcorn texture onto the plastic. Now as you can imagine, if your ceiling is large this process can take a very long time. Then you will need to touch up the drywall on the ceiling and repaint. Overall the sweat equity that you put in will make for a much more appealing living space. If you are ready to get rid of your popcorn ceilings but don’t know if they contain asbestos, please give the experts at NOW Environmental Services a call, we can put your mind at ease.