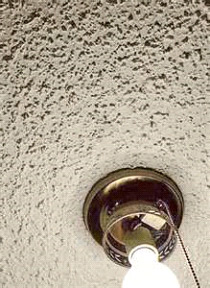 As with the fickle nature of our society, trends come and go. One of the great mysteries of the 20th century is the ubiquitous popcorn ceiling. Is it a ceiling? Is it supposed to be more natural looking? A throwback to when humans lived in caves perhaps? Whatever it is, popcorn ceilings were very popular through a major portion of the 20th century. At NOW Environmental Services we want to provide you with relevant information about substances that may be present in your home, such as mold, lead, radon and formaldehyde; in the case of popcorn ceilings, the concern is asbestos. At NOW Environmental we offer the most comprehensive testing solutions for a wide variety of indoor air quality issues. Additionally, we offer training classes from simple awareness seminars, CPR/First aid and even AHERA Certifications. Whether you own an asbestos disposal business or simply have a mold problem in your basement, NOW Environmental has services to fit your needs.

The Origins of Popcorn Ceilings

In the old days, building technology dictated that plaster was used to cover the walls and ceiling. Many of the walls were built, not of drywall, but slats of thin boards and plaster was applied to the finished walls and ceiling. As time went on and the use of gypsum drywall become much more cost effective, plaster fell out of favor due to the cost. Enter popcorn ceilings. As with many other building advancements, popcorn ceilings caught on due to the ease of application, sound deadening benefits and the ability to cover mistakes. The real reason for utilizing popcorn ceiling texture varies by which source you ask. Some say that the construction industry began relying heavily on the texture as a crutch to save time during the build. Basically, a spray-on textured ceiling is much more time efficient than a traditional finish utilizing taping and texturing. One of the more popular answers is that it cuts down on ambient noise, making for a much quieter home, particularly in the bed rooms and hallway where popcorn ceiling was most often utilized.

Getting Rid of The Popcorn Monstrosity

Unfortunately, getting rid of popcorn ceilings can be a costly endeavor, particularly if the texture contains asbestos. NOW Environmental offers testing for asbestos in your popcorn ceilings. Please contact us before you hire a contractor or attempt to remove the texture yourself.

The only way to remove the popcorn ceiling is to scrape. Techniques may vary, but they all include a massive amount of scraping, and you can probably imagine that this creates a large mess if not contained. Herein lies the problem with scraping your popcorn ceiling off yourself; if your ceiling contains asbestos introducing the fibers into the air is when it becomes dangerous. When asbestos fibers are inhaled, they lodge in the lungs and can cause diseases such as mesothelioma. Of course there are many ways to avoid removing the popcorn texture and saving the expense and hassle of scraping the ceiling. Asbestos is not thought to be dangerous if it is not introduced into the air and many companies are able to seal up the ceiling, rendering the asbestos, tainted texture inert. The next, most common way to cover up the asbestos popcorn texture is to mount a new ceiling right to the old one. One technique is to fit acoustical tiles directly onto the ceiling, another is framing out the ceiling and drywalling it in. Some homeowners have simply elected to leave their asbestos ceiling and keep their home in original condition. The problem is, one never knows when asbestos will be introduced into the air. Whatever your feelings about popcorn ceiling it is best to have your home tested for indoor air quality by the experts at NOW Environmental Services. We offer complete asbestos surveys and analysis, utilizing AHERA certified inspectors; we also offer mail-in testing kits for a super easy, noninvasive results, generally within a few weeks.

Contact us today for more information, whether you need training or simply testing we are your local Puget Sound consulting and compliance firm. Stay tuned until next time when we discuss lead in homes. Lead can be more common than you think and is an issue that should be addressed as soon as possible, particularly with small children. Feel free to contact us 24/7 for any asbestos related issue and until next time, breathe easy!